Russell Marker and the Origins of Bioidentical Hormones

Click Here for my previous article, The Safety Of Bioidentical Hormones.

Where do Bioidentical Hormones Come From?

A couple of times a week, I get the question, “Where do hormones comes from ?”  Russell E Marker was the Penn State chemist who originated Progesterone and other Bioidentical Hormones from a plant steroid called Diosgenin.  (upper left image Russell Marker courtesy of American Chemical_Society)

Who was Russell Marker ?

Russell Marker was a Penn State chemist in 1938 who invented a practical way to mass produce Progesterone, the pregnancy hormone. using a technique known as the Marker degradation process. 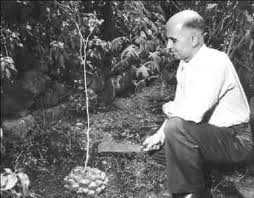 In 1938, Marker was a chemistry professor at Pennsylvania State College working on plant steroid chemistry.   During this time, Marker found a plant steroid from the Dioscorea family called Diosgenin which could be easily converted into the human bioidentical hormone, Progesterone.

Finding the Plant Material in Mexico

In November 1941,  Marker found what he had been searching for in a botany textbook describing a Dioscorea plant  indigenous to Veracruz in Mexico, called Cabeza de Negro.  Left image: Diosgenin from Diascorea plant Mexican Yam courtesy of wikimedia commons.

In 1942, Marker then traveled to Mexico where he purchased some of the Dioscorea plant material and started the mass production of the bioidentical hormone, Progesterone.

In 1943,  Marker resigned from Penn State University and moved to Mexico to begin mass production of Progesterone and other bioidentical hormones.    Marker refused to assign patent rights to anyone, including himself, thus granting free use of his invention to anyone interested.

In early 1944, Syntex was formed in Mexico to manufacture Progesterone from the Diascorea Diosgenin.  In May 1945, over a dispute, Marker left Syntex and started a new company, Botanica-mex, near Mexico City which then made  several kilos of Progesterone.   Botanica-mex folded in March 1946,   and was restarted as a new company called Hormonosynth.   During this time, the cabeza de negro plant source was replaced by another yam called barbasco, containing 500% more diosgenin.   After Marker’s retirement, the company was again reorganized as Diosynth. 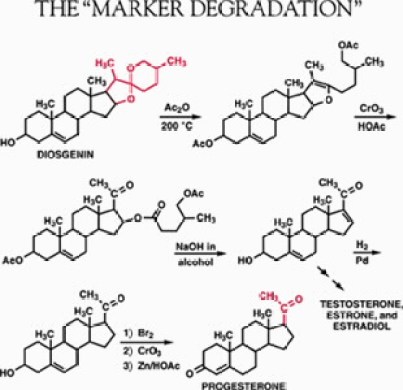 After Marker left Syntex , the company recruited another chemist George Rosenkranz, who began October 1945, and Syntex was again selling progesterone.    Rosenkranz extended the process to the production of testosterone and other bioidentical hormones.   Rosenkranz built a research program at Syntex, and recruited other  Ph.D. chemists including Carl Djerassi and Alejandro Zaffaroni.

Cortisone and the “Pill”

Further research at Syntex led to discovery that this same plant steroid precursor Diosgenin could be converted to cortisone, a powerful anti-inflammatory steroid.  The company also worked on the synthetic birth control pill.   By the 1950s, Syntex and its competitors were the major supplier of  bioidentical hormones to the United States.

While using Diosgenin as a precursor to progesterone, Russel Marker had no way of knowing that Diosgenin has its own health benefits.   One of which is as a natural anti-cancer drug.  Diosgenin also reduces inflammation, serving as an anti-inflammatory drug.  Diosgenein also serves as a lipid control drug, with beneficial effects of lipid profiles.

The Safety of Bioidentical Hormones

The Importance of Bioidentical Hormones

The following pages commemorate the designation of the “Marker Degradation” and creation of the Mexican steroid hormone industry as an International Historic Chemical Landmark. The designation was conferred by the American Chemical Society and the Sociedad Química de México in ceremonies at The Pennsylvania State University, University Park, Pennsylvania, on October 1, 1999, in Monterrey, Mexico, on October 25, 1999, and in Mexico City, Mexico, on December 2, 1999.

The Marker degradation is a three-step synthetic route in steroid chemistry developed by American chemist Russell Earl Marker in 1938–40.
5) http://pubs.acs.org/doi/abs/10.1021/ja01869a023
The Marker semi-synthesis of progesterone from diosgenin. Marker RE, Krueger J (1940). “Sterols. CXII. Sapogenins. XLI. The Preparation of Trillin and its Conversion to Progesterone”. J. Am. Chem. Soc. 62 (12): 3349–3350.
6) http://pabook.libraries.psu.edu/palitmap/Prog.html
Road to Hope for Female Infertility: Progesterone
By Stephen T. Spagnol, Spring 2010

Link to this article: http://wp.me/p3gFbV-o8